A to Z Reflections for Wrote By Rote

What I Did In April

As a participant in the 2015 Blogging from A to Z April Challenge I'm joining in with others who are offering their reflections on this sixth edition of the annual event.  The Reflections posts have been a tradition from the first Challenge in 2010.   To see the entire list of bloggers with Reflection posts visit the A to Z Challenge Blog.   The Linky List will open on Monday May 4th.

Wrote By Rote is one of four blogs that I had entered in the Blogging from A to Z April Challenge of 2015.   This year to make things somewhat easier for me in posting content I took the approach of using a common theme on all four blogs.  My theme for April was Elements of... which in the case of this current blog was Elements of Memoir.

In essence I explored what memoir is and what type of content it might contain.  My aim in presenting this particular content was to provide some ideas to those who have considered writing memoir or  who have some sort of interest in the literary genre of memoir writing.  My posts looked at the components that make up memoir, the approaches to writing memoir, and some memoir topics that can be used by someone writing about their life experience.

This year had a much lower response on this blog that last year.   One explanation that I can think of was that I didn't promote my posts as much as I did last year as I focused primarily on directing readers to my main blog Tossing It Out.  Also my duties as a Challenge co-host kept me preoccupied to some extent with matters aside from my blogs.

Another factor that may have attributed to a lower rate of following is that my posts this year were focused on the mechanics of writing rather than the personal stories that I presented in the Challenge of 2014.  I think that readers found the stories more appealing than the somewhat dry technical posts.

Hopefully readers weren't bored by the posts and the comments seemed to indicate some interest in my topic.  Also most of the posts were kept very short, a factor which probably had little affect on the visits my posts received.   There were few to no new visitors on my memoir posts this year with my comments coming from loyal readers who regularly visit Wrote By Rote.    My thanks to all of you who faithfully visit this blog and leave comments.

This blog did acquire some new followers as a result of the 2015 Challenge.  I didn't keep track, but there were probably 10 to 20 new followers added to my Friend Connect since the A to Z sign-ups opened in January.   Under the circumstances I don't consider that to be bad at all.

Only one post received over 100 visits and that was the post for "A".   All of the other posts received about 60 visits on the average..  Comments were light for the most part but they were good comments.

Since I was not on any strong mission of promoting this blog this year I am not disappointed in my results during April.   I added what I feel is some fairly decent content to this site and to me that is a worthy achievement.  If some of these posts add to any search engine credibility for Wrote By Rote then the time compiling this series was not wasted.

Again I thank my regular readers for your support.  If you are here for the first time or have only visited occasionally I hope you will continue to return and interact with my posts.   If you are interested in guest posting with a memoir related topic then please let me know.   It's been a while since I've had a guest post on this site and it's about time for some more of them.

If you're interested in guest posting please let me know in the comment section.  Or just leave me a comment with any observations you might have about my A to Z strategy this year, the blog in general, or what you think about the A to Z Challenge. 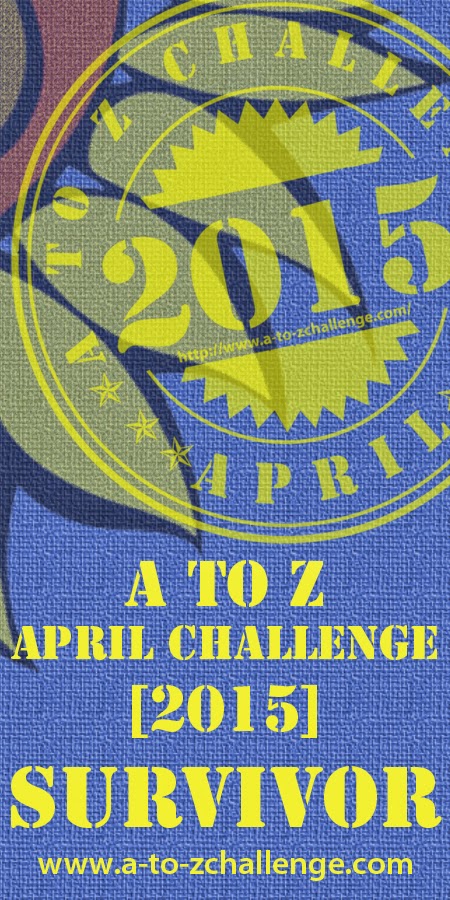 Email ThisBlogThis!Share to TwitterShare to FacebookShare to Pinterest
Labels: A to Z Reflections, Blogging from A to Z April Challenge, Elements of memoir