Jennifer Johnston Crow writes a helpful blog called Pivot.   She also writes memoir.   Today is one of three guest posts she is contributing to Wrote By Rote.   Watch for the next installment on  November 24th.  And be sure to visit her blog to say hello.  If you missed her first post be sure to visit Memories of Mighty Mouse. 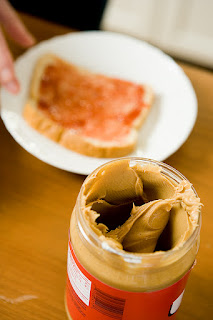 It’s the early ’60s. I’m a kid and mom is conveniently outside pulling weeds or doing some adult garden thing, so I decide to make a peanut butter and jelly sandwich. Apparently I haven’t paid much attention to mom’s sandwich techniques.
I carefully assemble the needed supplies. One knife. Two slices of Roman Meal whole wheat bread from Kroger, but not the end slice, for heaven’s sake. One humongous jar of creamy (not crunchy) peanut butter. One jar of homemade jelly, half-full or half-empty (depending on your perspective). It’s mom’s homemade version.
Mouth watering, I dig into the jelly, slathering the perfect amount onto a slice of bread, making sure to thoroughly coat the whole slice from crust to crust with a smooth, even field of fruity goodness. Had a ruler been handy, I might have measured to make sure the left side was the same thickness as the right.
I grab the knife and like any good kid, lick it clean before sticking it into the deliciousness that is peanut butter. Protein and fat, skillfully blended into the most amazing concoction. Bless the person who first discovered that a legume like a peanut could be squished into a spreadable consistency. Whoever it is should be enshrined somewhere.
I lift my knife. A perfect glob of peanut butter balances precariously along its length as I slowly, carefully navigate the distance between jar and bread. Tongue sticking out in concentration, I use two hands and control my breathing to avoid any sudden stops or starts, eyes glued to the knife’s load.
Many long minutes later, it seems, I reach my bread without dropping a single spot of the tan creaminess on the table. Licking my lips in anticipation, I begin spreading the peanut butter. On top of the jelly.
Yeah. It’s impossible to spread. In fact, it not only won’t spread, it pulls the jelly off in clumps and then tears the soft bread asunder. I stare in horror, disappointment filtering through me. My perfect peanut butter and jelly sandwich lies in shreds, nearly inedible. And I have learned one of the most meaningful lessons of childhood, although I won’t realize it for another 40 years or so.
What I learned so long ago is that I can’t hope to change the natural order of things and, if I try, the result is a horrifying mess not unlike the great PB & J massacre. And I learned that, if I don’t meet others where they are and for who they are, it becomes a PB & J massacre in disguise. And, if I consistently expect something from someone when I know –  I truly know — that what I expect is not authentic or natural for them? Right. It’s another PB & J.
Like that very first massacre back in the ’60s, when it happens in other guises all I see is that mangled sandwich lying on the table, and familiar disappointment sits heavily on my soul.
Now, I know that the proper ingredients for making a quality PB & J remain the same — knife, bread,  peanut butter, and jelly (no longer homemade) — but are applied in the correct order: peanut butter first and jelly second.
I know this, and I do it for any peanut butter and jelly sandwich I craft these days. The thing is, I’m still learning how to prevent PB & J massacres in my daily life, because they still happen. Oh, and by the way, I still lick the knife clean of peanut butter  before inserting it in the jelly. Some things never do change. 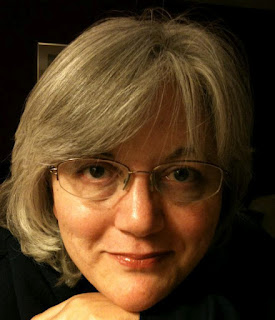 The Passing of Another Brave Soldier

For the past couple months I've been getting reports of the worsening condition of the man whom I have thought of as my stepfather for the past 15 years or so.  George Lechelt came into my mother's life in 1997, seven years after the passing of my father to pancreatic cancer.   George is a good man who has been an ideal companion to my mother during that time.

George was diagnosed with liver cancer in August, but it had probably been present for some time prior to that.  He had been experiencing discomfort in the abdomen for some time, but had attributed it to digestive problems.  We don't know for sure if it was the cancer then, but now we know for sure.  As I write this, George lies in a comatose state in a hospital in Maryville, Tennessee.  The doctors give him two days to two weeks--it looks like we're closer to the shorter prognostication.

I'll be leaving on Sunday (it's Friday night right now) to go back to Tennessee to say my good-bye to George and spend some time with my mother.  She's having a tough time with this and I'm sure there are some very difficult days ahead for her.  Since I live in California I rarely get to visit them.  Fortunately, my brothers and sisters live close to our mother and will be able to give her plenty of support and love.

The upcoming days will be days of reflection and reminiscing.   It will be one of those happy and sad times when families are brought together due to the passing of one.  I'm getting to the age where I'll be having more and more times like this.  There have been better reunions in the past and I hope more happier ones to come in the future.   George's passing is going to leave a big empty space in the family gatherings.

Someday I'll write more about George, but I will say this about him now:  George was one heck of an American patriot.  He came to America from Poland when he was a young man.  He served his adopted country in the U.S. Army after World War Two.  He loved John Wayne movies, big band music, and anything that symbolized America.  He had one of the biggest hearts of anyone I know.

George, even though you were heading toward 70 when I met you and I was pushing 50, I feel like I've known you all my life.  I wish I could hear more of your stories and share more of your wisdom and passions in life.  I was away so much of the time and never got to know you as well as I would have liked .

Life is like that.  We think maybe next time we'll have time to visit more and talk more.  But there never seems to be enough time.   I'm going to miss George.

Stages of Life for the Purpose of Memoir


There are a number of theories and philosophies about the stages of human life.    These stages may number from three or four to as many as twelve to fifteen, depending on considerations of what is being measured.  The criteria can be based on biological, sociological, or psychological factors.  All views are relevant and totally appropriate according to the outlook of the viewer.  From my point of view I would like to consider the four stages of life as seen through the eyes of the memoir writer.

I would posit that there are essentially four major general stages that affect the memoirist:

Each stage has a specific meaning and impact upon the memoir writer.  Sometimes a memoir might be undertaken within one of these stages and will provide an account of something relevant to that particular period of the writer's life.  Obviously a memoir written during one of the early stages will not be a complete life story, but only a look at a life to date or certain instances that are important to that person and of potential interest to others.

This slice of life writing is a topical memoir that tends to focus on a notable period of a person's life to date.   A memoir of this nature might for example look at a young person's experience of being bullied and how they overcame it, or a battered spouse's ordeal and eventual escape from the situation, or a successful business person's rise to success.  These types of memoirs are not the complete story when looked back upon, but merely chapters of the larger life story.

My intent in this post is to establish a groundwork for some future posts I will be presenting that will look at each of the four stages of memoir writing.  Forgive my ruminating, as I hold no claim to expertise on this topic.  The views that I am expressing here and in future posts are in a sense for the sake of personal contemplation and to seek other opinions about this topic.  I look forward to hearing some of your thoughts about this.

What are your views on memoir writing?   Do you agree with the stages I've proposed?  Which life stage do you think has the most impact on an individual?   Which stage is richest for memoir material?

I welcome guest posts on any of these topics if you have something special you'd like to discuss about one of them.