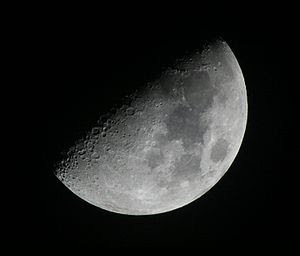 Image via Wikipedia
I try to remember but I can't.  It's the exact year that I don't remember, or most of the details of that evening.  I do know it was New Year's Eve.

I was married to my second wife, Susan, at the time.  We were in Tennessee at my parents' house.  This is where we typically spent New Year's Eve.  It was the more happening place between going to Richmond, Virginia, where her parents lived, and being with my family, who were the more fun party people.

My father was still alive at the time, our kids were still babies, and my wife and I were still in our thirties.  The house was aglow with lights and music and chatter and laughter as the festivities pressed on toward the turning over of one year to the next.  Everyone was having a grand time.

At one point Susan and I decided to go out into the dark quiet of the night to take a break from the activity in the house. It was unseasonably warm that end of December night.  Strangely and unseasonably warm--more like a summer night, but with the crisp dryness of autumn.

In silence, we strolled into the expansive back yard to a point that was about fifty yards from the house and sat down side by side in the desiccated winter grass.  Wordless, we smoked a joint under a cloudless starry sky and basked in the comforting balminess of the evening breeze.  Gazing upon the big house with lights in every window silhouetted against the black night sky, I slipped into a meditation.

Here from where we sat in the back yard, the lights, the house, the people seemed so far away, and it was only Susan and I with our life together beautiful and filled with so much promise.  A feeling of serenity and security enveloped me as I clutched Susan's hand.  I felt that now was forever and this moment would have no end.

Then a whoosh of warm wind swept over us and I felt exhilarated.  With a deep breath I leaned forward to breathe in the moment.   It was only Susan and I.  Our world was perfect.  A mental image of a distant future filled my mind--a place peaceful and beautiful where my wife and I would grow older together and watch our grandchildren grow and we would fade into the twilight years happy with the satisfaction of dreams fulfilled.

That was then, one moment on a New Year's Eve many years ago.  Not too many years after that night it ended.  Things changed and became different.   I'm not even sure what happened or why it happened, but only that it did happen.   Susan left and what we had was over.  Any dreams she had once had about us were simply shrugged off as she moved on, leaving me to shoulder the burdens of memory and the confusion of questioning why things had come to the point they had reached.

It was one New Year's Eve when things were weirdly warm and sublimely wonderful.  It was only an illusion--my personal illusion I guess.  The winds bring change that we don't even realize, things we don't understand even after they've blown past us.  Life sweeps us forward to where the next adventure awaits.  There is time for memories, but no real time for memories.  The memories are only illusion.

Capture this moment in time.  Savor it and breathe it in deeply.   This is the last time you will ever be here.