Thank you for allowing me to guest blog!
My memoir, The Dog Lived (and So Will I) will be published by Sourcebooks on October 1, 2012.  These are words I still cannot get used to. I still grin like an idiot. I still think it can’t possibly be true. But, with each step through the publication process things gets more and more “real” and exciting. So, thank you for allowing me to share a little bit of that excitement with you.
The short version of what my book is about is “everything I needed to know about cancer, I learned from my beagle.”  Everything I needed to know about getting published? Well that was a bit more complicated. I did it in what I think is probably becoming the “old fashioned way.” I spent many months writing sample chapters and then many more months writing a proposal (big props to Michael Larson’s book “How to Write a Book Proposal”).  I researched agents, spoke to writer friends, read the dedications in my favorite memoirs (to find out who their editors and agents were) and then spent a lot of time on QueryTracker.net. (I’m a big fan.) The first line in my query letter to agents was “I’ve been given a cancer diagnosis twice—once on behalf of my beagle and once on behalf of my right breast.”  It worked.  I received many requests for the full proposal and eventually was lucky enough to have a choice of agents. I chose Sarah Jane Freymann and I couldn’t be happier with my choice.
Sarah Jane spent another couple of months helping me revise the proposal and re-work some of the writing sample. She was wonderful at pulling out a thread in the story that gave it staying power (because you know from the title that the dog and I both live…there had to be something else to keep the reader intrigued and she helped me focus on that). Also, she told me that I had to make her laugh and cry. Despite the fact that the book includes not one but two cancers, I had a much harder time with the “make ‘em cry” aspect—it’s just not in my nature. Eventually, we got there and the proposal went out on submission.
I’ll be honest—submission was tough. There seemed to be much excitement from publishers at first and then silence. I was in Fiji during the initial stages of submission (a pre-planned once in a lifetime trip) with limited internet access and drove myself (and probably the entire island we were on) nuts trying to check in. Yeah, um, it doesn’t really happen that fast. We got some “the dog book market is flooded” responses and some “the cancer memoir market is flooded” and the occasional “ugh, not another memoir” (okay, I’m paraphrasing that one). And then, finally, we started to get “I love it!”  And then, writer dream of all writer dreams, an editor called. Shana Drehs at Sourcebooks called and discussed her love of the book, our thoughts on the market, and, of course, dogs. Oh, and a publishing contract. (Yesssssssssss!!!!) 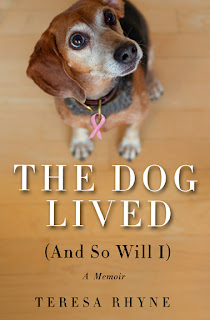 Then things got really interesting. See, for all the research I’d done on getting to this point (a publishing contract), I really knew very little past that. And there is so much to know! I signed with Sourcebooks in October, 2011. My completed manuscript was due January 4, 2012 (I made it!).  Somewhere in there I started getting sample covers and eventually we had the perfect cover. Per. Fect.
(Yes, that’s my actual dog. Their art director gave me a sample cover and a photographer friend took the photo.)
Shana edited the manuscript throughout January, then got it back to me for another round of rewrites toward the end of January, and I returned those edits to her on my birthday, February 17th (no better way to spend a birthday, and I’m not kidding!). Before I got to relax too much though, I learned the publisher’s sales conference was coming up…and this is key in publishing. How did I know this? Jacqueline Deval’s book “Publicize Your Book,” which my wonderful and very smart boyfriend had given me for Christmas.  The sales conference is when the publisher’s entire staff and outside sales team meets to discuss the upcoming season’s list of books. In other words, it’s the book’s public debut. Shana had asked me to make a book trailer…I had two made.

I also thought food would be welcome, so I sent 75 of these cake pops (“Pup Pops”): 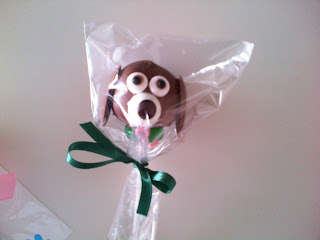 And I wanted them to remember the dog, so I sent 75 homemade dog treats in a “doggy bag.” The treats were green and directly related to an aspect of the book. I also sent bookmarks advertising the book. [I coordinated all of this through my editor and she was ecstatic to help. Fed Ex was also ecstatic with the cost of shipping. Ugh.] Overkill perhaps, but I had the time of my life watching the live tweeting during the sales conference as pictures of the pup pops were posted and comments on our video flew.  I knew it worked when I was immediately invited to attend the American Librarians Association annual convention (in Anaheim, CA)  and Book Expo America (in New York!  Another writer’s dream!)  to sign books at Sourcebooks booth.  Both events are in June and I cannot wait. Then I got a call from the sales and marketing director thanking me for all my efforts. I’ve never been so happy to miss a phone call—because now I have a voice mail message from him saying so many amazing things about the book and the promotion of it. Just this past week I learned the book will have a two page spread in their fall catalog. I have officially died and gone to new author heaven.
What’s up next is that my editor and I are finalizing the back cover copy; I’ll be meeting my publicist (by telephone) and working out marketing plans; I get the manuscript back from copyediting on March 29th and have 2 weeks to turn it around to them; and, all my editor is busy now and for a bit getting blurbs for the book, sending out review copies and finalizing the book.
All this before the book is even “real.” See why it just seems like a dream?
Perhaps I’ll be invited back to share with you my experiences as a new author at the ALA and BEA conferences and in promoting the book. We have many exciting plans for that! In the meantime, I’m happy to answer any questions…I’m sure I’ve left out part of this incredible journey, but my 1,000 words were up 100 words ago.
Teresa, I can hardly wait for your return visit!  This is an exciting story for many of us in many ways.  Congratulations on the upcoming publication and I wish you the greatest success with it.   Readers, now it's your turn--what would you like to ask Teresa?

Teresa's Blog can be found at:
http://thedoglived.blogspot.com/

Author website is:
teresarhyne.com   (to be activated soon if not already)

Email ThisBlogThis!Share to TwitterShare to FacebookShare to Pinterest
Labels: BookExpo America, Michael Larson, Publishing, Sourcebooks, Teresa Rhyne, The Dog Lived (and So Will I), Writers Resources