Today I welcome a dear blogging friend, Ron Easton.  Ron has been an A to Z Blogger since the 2011 Challenge.  For the 2012 April Challenge Ron was the inspiration for the A to Z Video Contest which I hope will become an annual prelude to the April event.  Ron blogs at Dads UnLimited.

First of all, thank you to Mr. Bird for his friendship and welcoming attitude that allows us a place to come and connect.


Second of all, thank you to all of you reading this. I know how valuable time is. 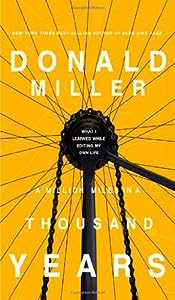 Cover via Amazon
I read, a few weeks ago, a really fun memoir by Donald Miller. In it,  A Million Miles in a  Thousand Years, he recounts the writing of a screenplay from an earlier book of his, Blue Like Jazz.  In the writing, he drops an interesting idea. While revising his own life for the big screen, (an act he struggled with, ethically) he began to wonder whether we really can write our own story, through living deliberately.  This really has caused me to think.
His premise is that the best stories, the epic stories, are the ones with great sacrifices, great acts of service for another or for the globe. From that point, he investigates why we settle for boring lives when we would never let our books or movies away with such banality. Why do I praise others for their sacrifice and not pursue it in my life.
He considers his own attempts at living a full life by training for and then traveling to Machu Picchu in Peru to climb the mountains and hike the long trail to that ancient wonder. As majestic as the journey was and as good as it was for him physically to get in shape for the trek, at the end of it all, he wondered at his own motivation. In the end, it was for him. As great as that adventure would be to tell about, as fun as the pictures will be to show friends, relatives and total strangers, there was no long lasting good conceived outside of himself. What a great realization to come to. While self fulfillment and self-improvement are great, he realized those themes were becoming the goal of his life.
That realization of his has sparked something in me too. A quiver full of kids and too little dough does not allow for Machu Pichu trips in my own life. At the same time, I do allow myself to fill my minutes with “me”, and not “us”, or “they”.
Added to that book have been the last two books I’ve read, Calico Joe by John Grisham and Real Marriage by Mark and Grace Driscoll. The first a baseball novel, the second a how-to book on great marriages from a God-first point of view. Both of these books deal with the end redeeming and being better than, the beginning. Grisham has one of his characters doing the right thing for the first time in a long time because he doesn’t want to die a loser. The Driscolls suggest that more important than the first day of our marriages is the last one, does it end in divorce or death, have we endured or enjoyed?
How do I script my own life then? From here on this becomes theory, not reality, for we can’t do anything about those unscripted lightning storms, tornados, cancer cells, job losses, etc. However, if life is all about choices, as everyone tells us, and as I preach to my own children, then why do I choose the mundane over a mosaic, maudlin over magnificent? If I choose others ahead of myself, then I’m writing something great. That is so hard to unlearn in our culture of ease, leisure and look-out-for-number-one attitudes. If I look to the final chapter, to read the ending I want to see there and plot out the moves to arrive at that point, what an epic tale I could write and live. As a Christian, I want to hear the words, “Well done good and faithful servant.” But don’t we all want that, whether it’s in our obituary, at the funeral, or just in people’s minds? Then I actually have a memoir worth writing, and reading.
To a better script!
And there may not ever be anything new here to say, but I'm fond of finding words that say it in a different way- T Taylor