I came upon the blog of Michele Truhlik during the 2014 A to Z Challenge.  Today she shares a bit about experiences with her beloved dogs.  You'll find the link to her blog at the bottom of this post.  Be sure to drop by to say hello.

Unbeknownst to Kate, fate was sealed that sunny balmy day back in April 1999 when her thwarted efforts to pound the metal pole of the designer hummingbird feeder into the rocky Texas soils - soils so different from the rich deep grounds from where she hailed - netted her nothing but sweaty irritation and a tattered metal edge, leaving the rest of the pole assembly completely useless.

As she recites those familiar chants: "Why does this s**t always happen to me?  Why can't anything ever go right?!" she blamed the universe for all her problems while categorically denying any ownership or responsibility for her own destructive impatience as the main root cause.

Rushing through the Wal-Mart parking lot, of course pissed because she NEVER finds a close-in parking space (again proving her theory that the universe plots against her), with gnarled garden pole in hand, hoping they wouldn't question why she needed to exchange the damaged pole, she connived a plausible answer in case they did.  She was suddenly calmed and intrigued by a group of large dogs lingering at the automatic doors of her second favorite store.  She recognized the breed as greyhounds - a breed she knew little about though she did know that they were probably retired racers.

Her steps slowing a bit, her thoughts shifted to "I think it just might be the right time for me to get a dog."  This thought rocked her.  Because, although she loved dogs, she had always felt her lifestyle not conducive to dog ownership…she was far too into freedom and flights of fancy for any kind of tie-down responsibility.  Still, deep down, she knew it was time.

After the lengthy application and substantial (albeit impressive) adoption approval process, Maggie, a three-year old return, was delivered to her.  The sweet and striking reverse-brindle, with hints of golden browns peppering her shimmering black coat, immediately stole Kate's heart. 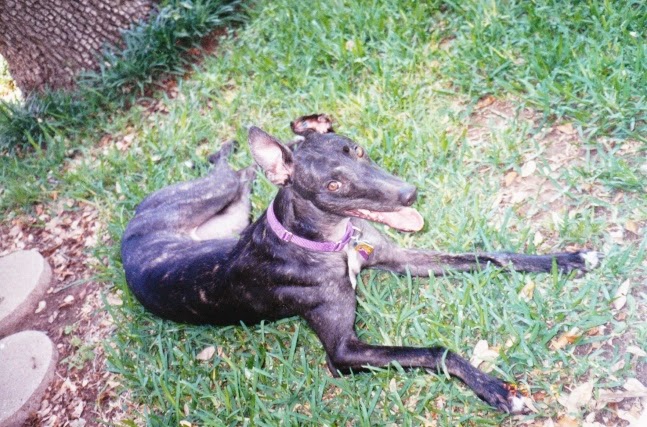 This strong female was clearly and indeed a natural survivor (possessing instincts, incidentally, not unlike those of her new owner) and she displayed remarkable resilience from the harsh reality she had escaped…that of the underground racing circuit where illegal gambling took place in makeshift backyard and field tracks run by those known in that seamy side of the industry as Rabbit-Runners (because they would throw a live rabbit onto the track and bet on which dog would get it first). These were disgusting criminal sorts akin to Pit Bull fighting ringleaders, driven by greed, narcotics and machismo, having no regard for life, be it animal or human.
It wasn't until Bella came along though that Kate became painfully aware of the cruelty looming out there for these poor incredibly docile creatures.  Bella came in a condition that can only be described as heartbreaking: an obvious escapee from rabbit-running hell, she lived in the wild for God knows how long.  By the time she was found on a lonely farm in rural Central Texas, she had sustained almost complete hair loss caused from either extensive mange or shot nerves.  She had whittled down to a shameful 38 pounds, just over half the weight she should have been as a healthy grey of three years.
Kate first encountered this pitiful female while she was in foster care.  She was completely devoid of hair on her undernourished body...so devoid that it was literally impossible to guess just what color dog she really was.  As the dog lay in a corner, apprehensive and frightened, she noted the exceptional beauty of her face.  In her mind, she named her "Bella" because of its French meaning.

Disturbed by the persistent flashes of "Bella", she pursued adoption of her.  The relationship between her and her new greyhound was challenging, to say the least.  Bella was terrified of people, cowering at even the gentlest of approaches.  It became obvious that this forsaken little fawn female had suffered at the hands of cruel savagery, and it was suspected with good reason that violent head blows were doled out when the dog attempted to fulfill its natural hunger by eating. 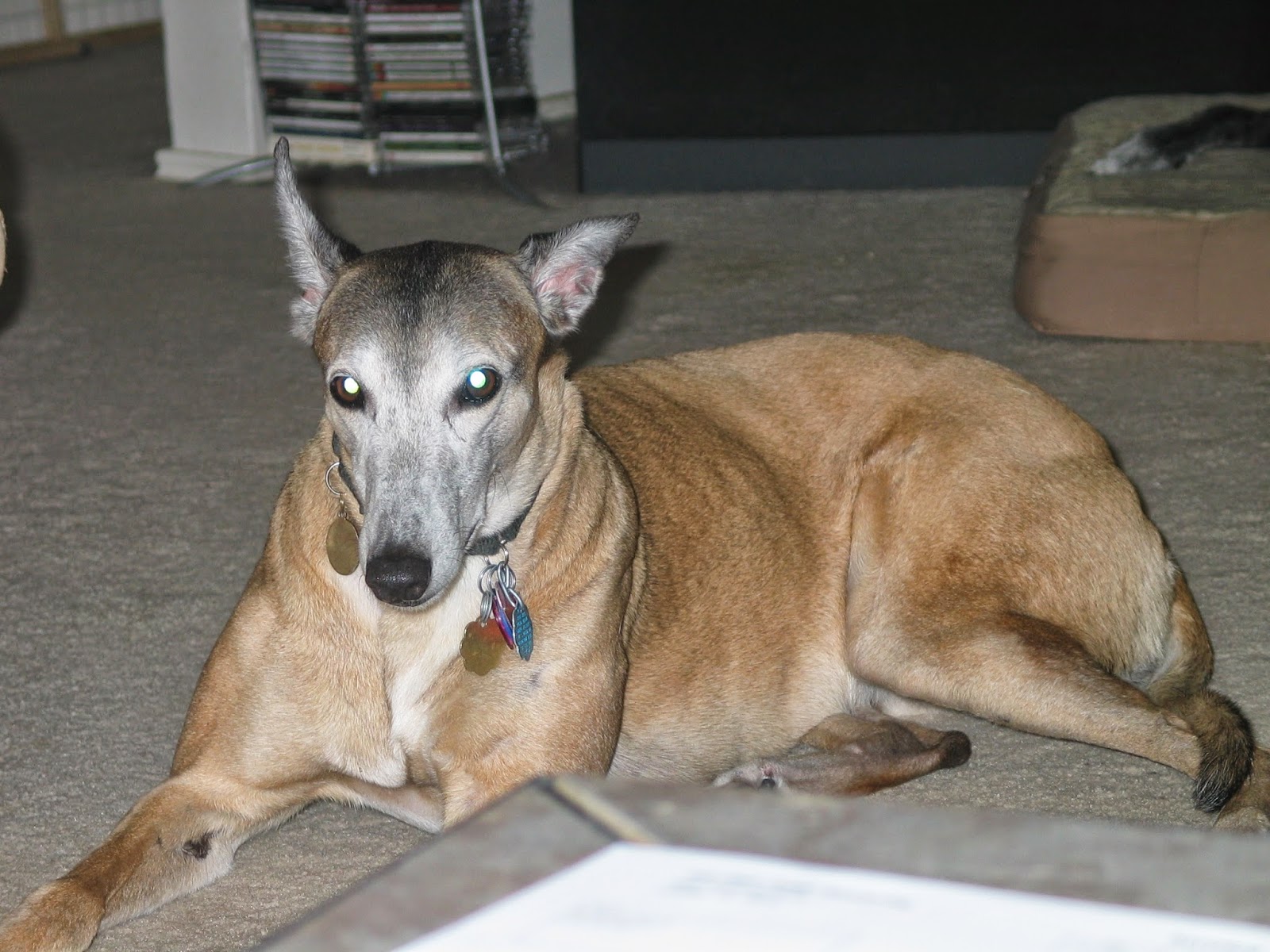 With time and kind patience, she waited eight long months before Bella even allowed her face to be stroked.  Up until then, the canine's heart would race with sheer panic at any human touch.  Kate was keenly aware of all the milestones, big and little, along the way as she awed at Bella's brilliant transformation from scared skittish spook to loving and trusting companion. 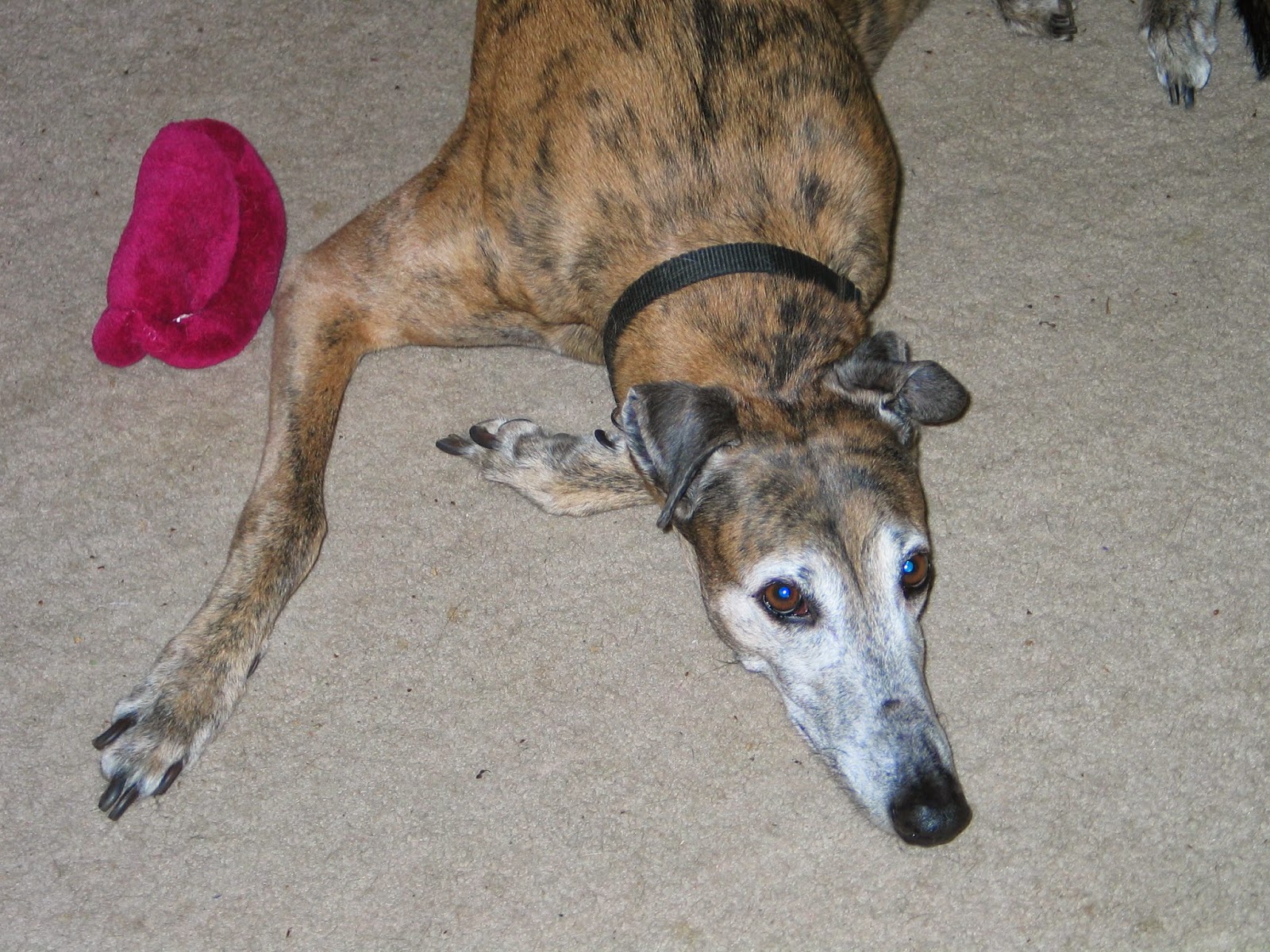 Adding some testosterone to the dominantly female household, she and her then fiancé adopted Dodge, a big goofy brindle boy with the cutest flop-forward ears you ever saw. He was a well-adjusted dog as his years in the racing industry were spent with decent breeders who cared about their charges.  In no time at all, he adjusted to retirement life on the couch. 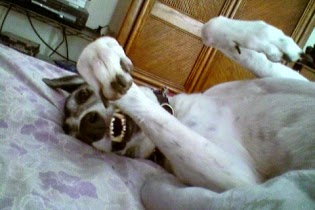 A little over a year later, Kate broke up with her fiancé and replaced him with Harry, an unruly 70-pound lap dog, aptly nicknamed T-Rex because of his ferocious-looking wide-mouth bite, playfully applied of course.  He was the crazy one of the bunch and constantly kept Kate laughing. 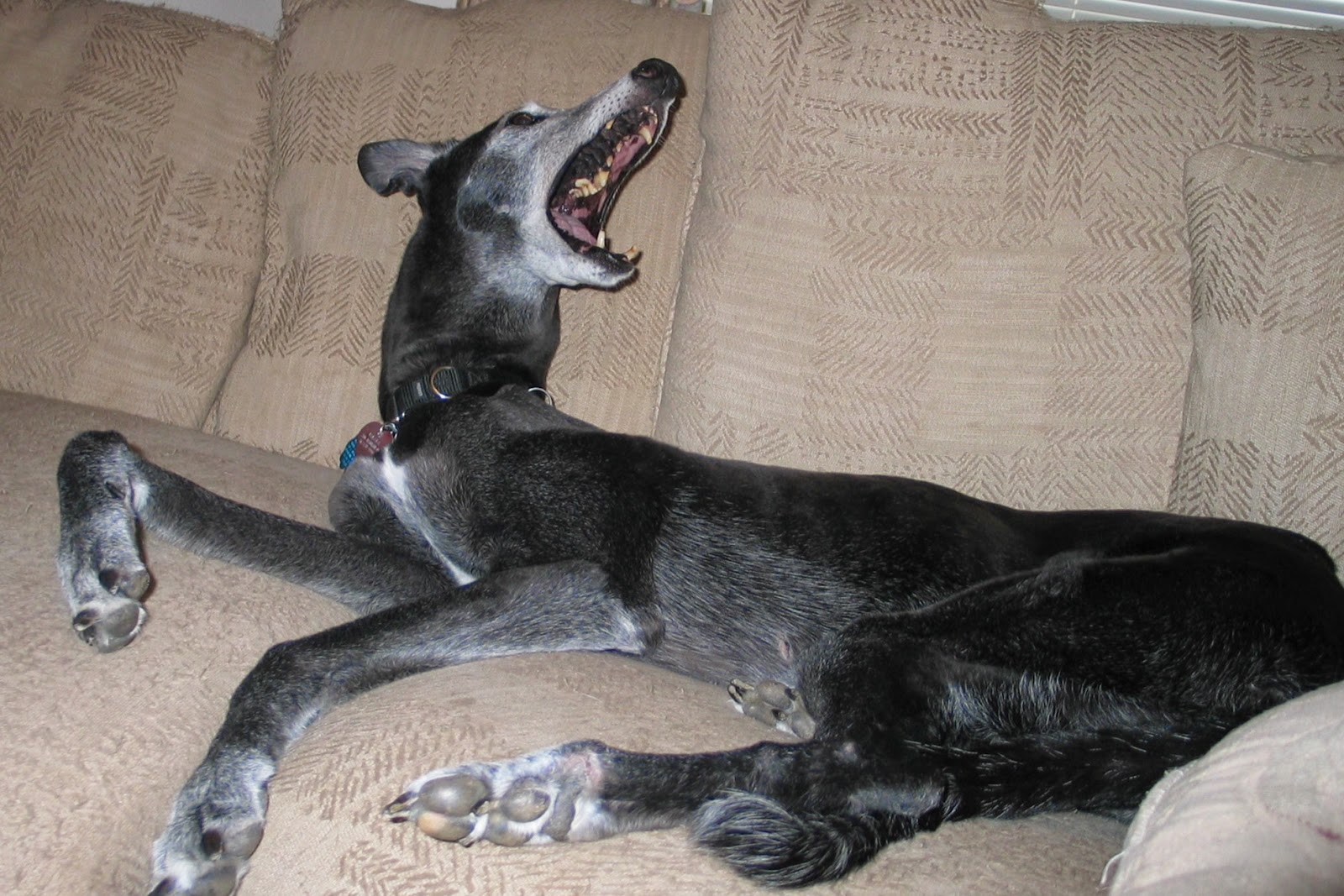 A few months after Harry's adoption, an adorable little skinny senior girl named Takala came to visit and never left. Kate had failed at fostering and succumbed to the fact that she had fallen victim to the “Potato Chip Syndrome,” the condition affectionately known as "Chipping" by greyhound owners, taken directly from that old Lays Potato Chips ad campaign claiming "You can't (have) just one."

Her life changed immensely and her five dogs became her world, her life, her reason for being.  Astounded by the absolute unconditional love and the many inspiring insights she gleaned from her "children", a core desire grew inside that drove her to take an activist role in helping to affect positive changes in the greyhound racing industry by attempting to rid it of the unsavory characters that so darkened its reputation.

A monumental task at the very least, she threw her heart into this new quest, so much so that she underwent a complete career change.  A newly licensed private investigator, Kate sat many a nights and many a weekend in the seedier parts of towns, discovering the players and watching the comings and goings of suspected rabbit-runners.

Crafty though they were, these hardened criminals felt fairly secure in their illegality.  It was well known among the groups that their clandestine operations went virtually unnoticed by overworked and overburdened local law enforcement agencies.  And so their dirty gambling and its associated animal cruelty and neglect continued.

In a bold undercover move, Kate had partnered up with friend and police detective Norman Feingold to break up the underground racing circuit she had discovered over the previous weeks during the hot humid and excruciatingly boring surveillance.

Knowing in no uncertain terms that all the men involved were dangerous men, or at least had the capacity to be, Feingold called on his old buddies from SWAT and secured an approved raid. With all the force of a commissioned Special Weapons and Tactics team, troopers armed with bulging muscles and intimidating fire power stormed the ranch and subsequently busted up the ring that held nine greyhounds trapped in wire pens way too small for their long once-graceful bodies.

Nightmares of the horrific scene haunted Kate and she was unable to shake the images of putrid soured food in dishes swarming with fire-ants, bone-dry water bowls surrounded by ankle-deep feces, the stench of infected wounds and the cries of injured hounds.

Felony charges were filed against all arrestees that day, most of whom already had lengthy rap sheets and some had active warrants.  The nine severely emaciated greyhounds were at once rescued and rushed to the emergency animal hospital.  Two didn't make it.  Upon discharge, the remaining seven recovered in foster care, and patiently awaited placements in their forever homes.

Kate visited the recuperating greys often.  Looking into the soulful eyes and feeling the stirrings of grateful greyhound hearts, she knew that she would chip yet again and at least one...no, two...ah, what the hell, three of the skinny greyhounds would become a permanent part of her pack. 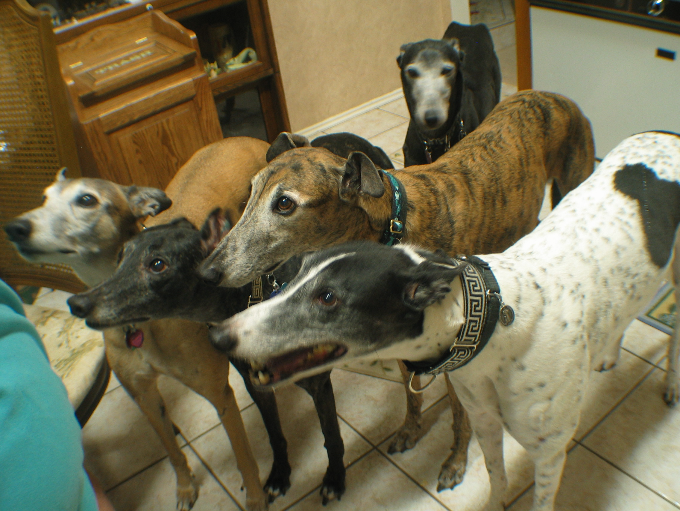 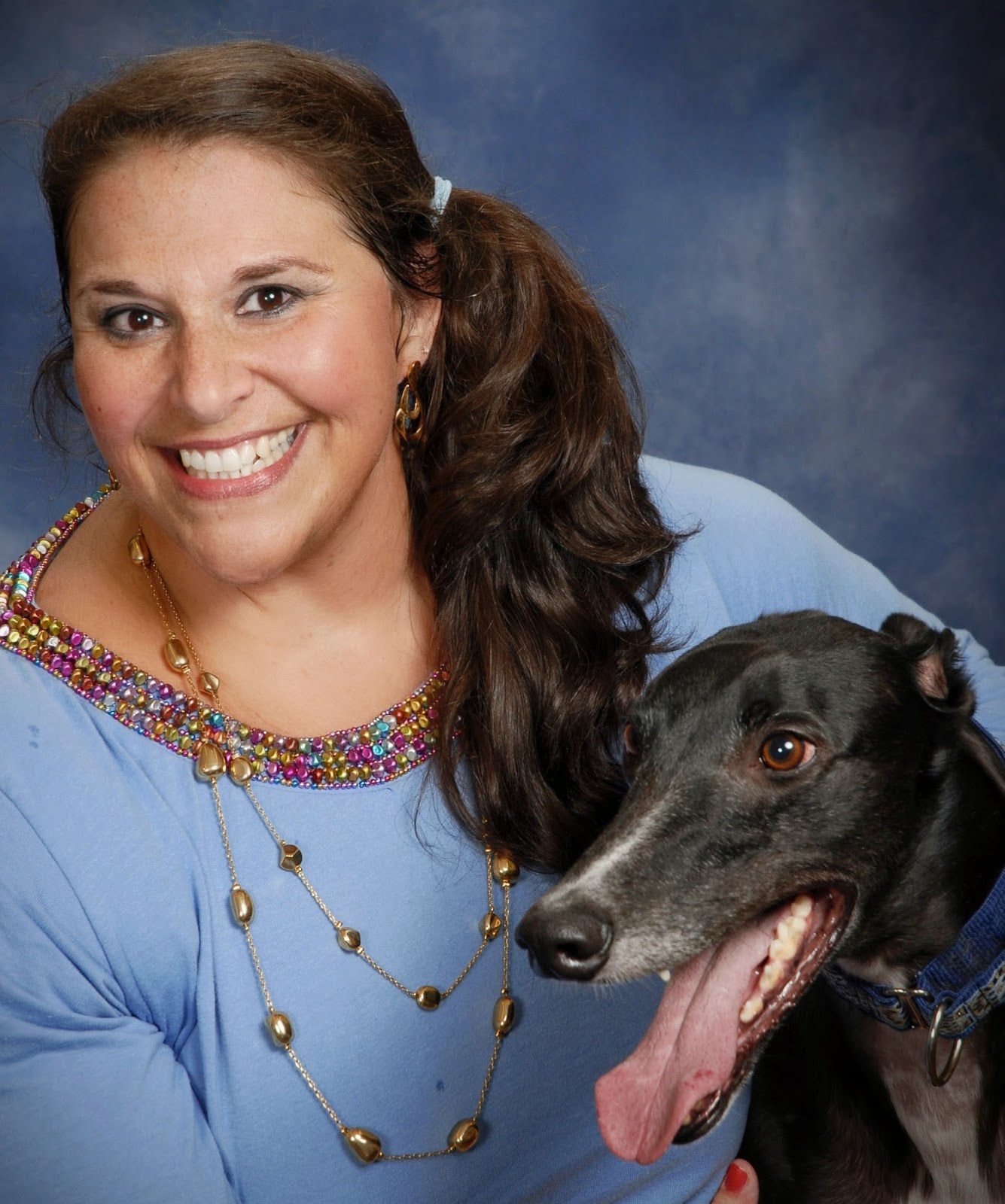 ABOUT THE AUTHOR:
Michele Truhlik is a writer, blogger and small business entrepreneur. Previously an owner of an advertising agency and a bar, she currently has a dog-sitting business and a jewelry business and is much happier being out of the corporate world. She is also following her calling and is an Animal Chaplain/Pet Shaman and will be officially credentialed and ordained in 2015. She has been rescuing and adopting greyhounds since 1999 and has been owned by 8 greyhounds. Pictured here is #7, Picasso. You can find her blogging at angelsbark.wordpress.com.  For more about Michele, see her AboutMe page.