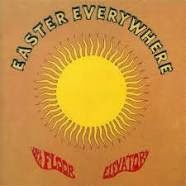 After the Big K discount store opened on Hall Road in Alcoa, Tennessee, I became a frequent visitor.   Usually I was looking for cheap record albums.  In my mind I can still find my way down the main middle aisle of the store to the record racks on my left.  They were almost dead center in the middle of the store and when I arrived to that point it became the center of my universe for the next half hour or more.

The stories I could tell about the music that I found in that store.  The cut-out bins featured older albums that were no longer as popular as they had once been, poor selling albums by artists who were well-known, and albums by artists that seemed very obscure--at least to someone like me in this small town.  I knew the hits that I heard on the radio and some of the counter-culture stuff they played on the college radio coming from Knoxville, but since I didn't keep up with the music magazines I didn't know about a lot of artists in the industry.

Maybe some of these artists in the cut-outs were even obscure to most music fans in the know.  All I know is that some of these recordings piqued my curiosity and I coveted owning more than I could afford.  It's funny to think back on this because the albums were mostly less than a dollar apiece to my recollection.   But I was in college and money was tight.  Every quarter counted.

Besides the cheap vinyl LP's which were displayed neatly in racks that could be flipped through easily, there were a lesser amount of 8-track cartridges which featured artists that were perhaps even more obscure than those on the record albums.  LP's were my format of preference, but some of the artists on 8-track were only on that format so sometimes I would have to break down to accept the lesser quality of the cartridges.  The biggest advantage to having music on 8-track was that they could be played in the car, but since at the time I didn't own a car that wasn't a big deciding factor for me.

During one of my visits to the Big K cut-out record department a peculiar sounding 8-track tape caught my eye.  The Easter Everywhere album by the oddly named 13th Floor Elevators was one album that I was not going to let go.  I'd never heard of the group before and there was no information about the group on the generic cardboard sleeve containing a crude looking cartridge that looked as though it could have been manufactured in someone's garage.  The packaging didn't matter as much as the group's name.   With a name like 13th Floor Elevators they had to be interesting.

As it turned out I wasn't disappointed.  The sound quality was almost as crude as the appearance of the packaging, but the songs were extraordinary.  I was mesmerized by the unique sound of the group from my first listening.  Primitive and raw sounding, the music seemed so alien to me that it might have been dropped to Earth by a passing UFO.

Actually it was good old rock and roll with a heavy dose of psychedelia.  In some songs the lyrics were fairly standard fare while other songs such as "Slip Inside This House" were mystical and spiritual.  I played the heck out of this tape until every song was seared into my brain.   Eventually I saw some other albums by the group in the record department of the University of Tennessee Bookstore in Knoxville, but my finances made purchasing any of them prohibited and then eventually the few albums they had by the group were gone.  Then after a while my cheap tape cartridge wore out and that was gone as well.  That was in 1972.

I went for over a decade wondering about this mysterious group with the odd name and songs that stayed with me.   Now that I could afford the album I wanted to find a copy, but alas none was to be found anywhere.  That is until some time around 1986 or so when I read a story about a singer/songwriter by the name of Roky Erickson who had been a founding member of the band of my elusive quest--The 13th Floor Elevators.

Needless to say I was excited by this discovery and now had a name and a hope to go by.   Erickson had released some solo albums and the Elevators' albums were available as imports.  On the road with my touring show at the time, I would typically visit record stores looking for new cassettes to buy.  There was some standard fare that I always looked for:  Anything that I didn't have yet by Bruce Cockburn, Van Morrison, The Good Rats, and now Roky Erickson and The 13th Floor Elevators.   I knew now to also check out the vinyl in addition to the cassettes.  Even though I didn't have any way to play records on the road, I figured that if I had the albums I could transfer them to cassette when I was home on tour breaks.

It still seemed like a futile quest for the Erickson and Elevators albums.  That is until I got to Texas.  Since Texas was Roky Erickson's home state I started finding the albums for which I had been searching so diligently.  They weren't always cheap either.  Nevertheless I accumulated them and stored them in a safe place in my van, hoping that they wouldn't get warped being closed up in the hot vehicle.  They made it home safely and I now had the music on cassette for me to listen to when I returned to the road.

In 1990 a resurgence of interest in the songs of Roky Erickson came about with the release of a tribute album dedicated to songs from his solo albums as well as some of the best from the 13th Floor Elevator days.  What a great album!  Artists like ZZ Top, R.E.M., Judybats, Doug Sahm, and many others were showing their love for an artist and a group that had influenced their own music.   For a while I couldn't get enough of this tribute album, Where the Pyramid Meets the Eye, playing it in my van when I was traveling and listening to the CD while at home.

CD's of the music of the 13th Floor Elevators and Roky Erikson became fairly easy to find so I built up my collection of everything I could find in that format as well as the vinyl and cassettes I already owned.  My thirst for the music was slaked and now I could listen to it anytime I wanted.  For me a quest was ended as a justice of recognition was bestowed on the great Roky Erickson and the group he began in 1965.

Roky Erickson is still only known by a relatively small group of fans, but his fame is worldwide. The 13th Floor Elevators are unlikely to ever rate induction into the Rock and Roll Hall of Fame though they should be.  However their music remains. You can find them on YouTube in numerous song clips as well as in their complete albums.  Future history might remember them with a greater fondness and commemorate their contributions to rock music, perhaps more so than some artists we now think of as the real behemoths of modern culture.  Then again rock music might eventually fade away into the obscure realm of curious musicologists.  Only time will tell.

You can read my review at Amazon for Easter Everywhere.  If you do visit I'd be much obliged if you clicked on the "Yes" button where they ask if the review was helpful.

Please join me tomorrow February 15th for my Battle of the Bands post at Tossing It Out as I feature a song by the 13th Floor Elevators.

Have you ever become so obsessed with something musical or otherwise that you searched high and low for?    Are there any particular music artists that you feel that you need to own everything that was ever released by them?    Do you recall the Kuhn Big K stores (not the Big K Mart stores)?