Messages from the Past

Recently a fellow who was my best friend back in junior high school sent me a newspaper clipping of a story about my family that  I had sent him when I was in high school.  He had lived in Indiana at the time and I had moved to East Tennessee.   We kept in touch for a few years corresponding on into our college years.  Then after a while we lost touch.

I'd been aware that he had moved to Arkansas and had gotten married, but I knew little else about what he was doing until we reconnected about ten years ago.  After that point of reconnection we once again began calling and emailing each other.

He told me that he was looking through some of his old scrapbooks and photo albums and happened upon the newspaper clipping.    Since that story appeared in the paper nearly 50 years ago he thought that I might not have a copy.   He made a copy for himself and then sent me the original.  Actually I still do have an original copy in my own scrapbook, but it was interesting to receive the copy I had sent to him.   The copy he sent contained messages from the past.

Having that annotated copy of the article has provided me insight of what I thought and felt at the time.   I've found other similarly marked items such as school papers, notebook entries, cards, and so on that were almost like messages to my present self from my past self.   It's interesting to come across items like these especially since I never kept anything like a diary.  In my mother's keepsakes I found other items that were from me to her and now they were back in my hands.   It was a blessing that she had kept these items over the years. 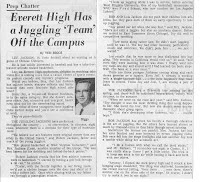 Have you received anything back from somebody to whom you had originally given it?   Do you have a tendency to write off the wall messages in odd places?   Where have you found a message from the past that you had written?

Email ThisBlogThis!Share to TwitterShare to FacebookShare to Pinterest
Labels: newspaper clippings, reconnecting with old friends, Where to find ideas for memoir writing