Have you ever considered why you are where you are today?

A recent post at L.Diane Wolfe's blog Spunk on a Stick asked the following:

1 - What was your own personal turning point?

At Diane's site there were so many good answers and stories from these questions with valuable advice to share. I'd encourage you to visit the post if you didn't see it and read through the answers in the post and in the comments. The post inspired me to the point that I decided to answer these questions to use on my own blog post.

The context of the questions originally asked in Diane's post were more in relation to writing and publishing, but they can certainly apply to any of us and with anything we have done in our lives.  I have not published anything yet, but I have lived life and done things.   Maybe my answers are something that you the reader can relate to or maybe they will inspire you to even write your own blog post on the subject.

Life is so full of twists and turning points that it can be difficult to pick one specific place on my personal timeline and say, "This is the decisive event that changed me in some significant way."    There are numerous milestones in my life journey that caused me to stop to consider which way to go next.  These would certainly include my educational experiences, jobs that I worked, and people whom I met along my way.  Had any one of those moments not happened it would probably have resulted in significant change in all aspects of my life which makes every milestone important in it's own way.

But let's just examine one major point that inspired me to look at my future in a different way.  Since I had grown up with a love for travel and a desire to work in the entertainment field, these were like magnets drawing my focus to a pin point rather than a meandering attitude of "What am I going to do with my life?"

The unlikely lodestar which stirred my imagination was Big Bend National Park.  In 1974 after nearly five years of attending college and working to pay my way through that education, I read an article in my hometown newspaper about this remote park in Texas and became very intrigued.  Soon after reading this article, in an ironic convergence of events, a long-time show biz friend of my parents was passing through town and spent a few days with us while he played some school shows in the area.

This fellow was an 8 millimeter film buff and had many films of the places he'd been in his touring life.  At that time I had been also playing around with film and since he was showing films related to my two great dreams of travel and show business I joined the older folks in the living room watching as the film images were projected on the wall as the man described what we were watching and the lifestyle he had lived.  Most of the films he showed that evening had been shot in West Texas and included footage shot in Big Bend.   Now I was hooked--I had to go there.

After that everything happened quickly as I look back on it all.  I convinced my best friend to drive his van to Big Bend during his July vacation from work.  The adventure was like throwing gasoline on a fire. Within a year's time, we drove down to Big Bend twice. The following summer I was offered a job with a touring magic show--an opportunity that I pounced on without giving the idea much thought.

For the next sixteen years I worked as a manager of a touring production and then another eighteen as a manager of a branch of the costume company that owned the show I had managed.  My dreams of travel and show business were essentially fulfilled for a lifetime of interesting adventure and meeting many fascinating people.

And to think it all started because I wanted to go to Big Bend National Park and went there.

In my blog posts--primarily ones to be found at my other blog Tossing It Out--I've often referred to promotion and marketing.  My philosophy is that everything we do in life is some form of marketing and promotion, if not for some product  or service, we do it for ourselves.   My best advice is to believe in what we want and what we are trying to "sell" (whether it be ourselves or a product or service) and then go for it.  Determination, research, and the right attitude can get us just about anywhere we want to go in life.   However, it's also important to know when to quit or to be willing to change when what we are doing is not working.  Persistence can take us far, but we should never mistake stubbornness for persistence.

There's always so much inspiration for blog posts to be found everywhere that I don't know how anyone can run out of ideas for posts.  I might run out of time often, but I never run out of ideas, even if it's variations on ideas I've already used.  Other peoples blog posts can be a great jumping off point for your own post on the same or a related topic.  When you leave a substantive comment on someone else's blog post, consider turning that comment into a blog post on your own site and then link back to the post that got you going. 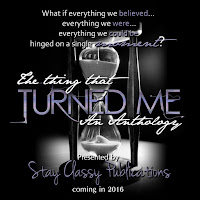 My post and the one at Spunk on a Stick was inspired by The Thing That Turned Me anthology from Stay Classy Publications which is set to release on June 30.    In this upcoming release, a diverse group of authors, bloggers, speakers and editors has come together to bring you a unique collection of writings:  The Thing that Turned Me,  an anthology revolving around the people, places and things in our lives that ‘turn’ us, or cause us to change in some way.


Have you ever written a blog post that was inspired by someone else's post? Have you ever thought about turning points in your own life? Is there anything that you are currently trying to promote?