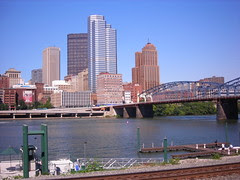 When my family moved to Pittsburgh, Pennsylvania in 1958 I was entering the second grade.  We moved into a newer duplex home at the bottom of a hill in the Penn Hills suburb.  The school I attended was at the top of that hill and there was a Free Methodist Church practically in our back yard.  I spent a lot of time at that church and this was when I began to read my Bible and think a lot about God.

With this new move came new things.  My parents had lived in a number of places after I was born and each move seemed like a step up.  The move to Pittsburgh brought the first purchases of new furniture for our young family.  Along with the furniture came luxuries like a better television, a hi-fi record player that played LP records, and an 8 mm movie camera.

Many of my Pittsburgh memories come from the 8 mm movie films that we viewed for many years afterward.  My actual memories are as fragmented as those films.  The memories come in disconnected snippets--visits to Kennywood Park, sled riding on the hillside behind our house, going early morning bird-watching with the pastor's wife on Saturdays, playing baseball in the backyard, and watching my parents juggle.   My parents spent a lot of time practicing their juggling act if they weren't actually out performing.

One evening I recall hearing my mother wailing in distress.  She informed my sister and I through her tearful sobs that my father had been hit by a car.   My little man insides seemed to drop, leaving me in a depth of sadness.  Now that my father was dead what would we do.  He had been the one who worked and provided for us.  I was afraid of the uncertainty that lay ahead.

But my father hadn't died.   He'd been taken to a hospital, but he was soon released with not much more than a big bruise on his hip.  With the heightened drama of reactions my mother often had to events, things sometimes seemed much worse than they were.  And the mind of a child can step the fantasy up a notch.

I seem to recall hearing about a bus accident in downtown Pittsburgh while we were living there.  I thought I read in the newspaper about how the bus crashed into a department store display window.  After the accident bloodied bodies were draped upon the furniture that was in the window displays.  There was death and carnage all over the sidewalk.  Many people had died and many more were injured.

Well, that's what I remembered.  Actually I doubt that I was reading the newspaper when I was in the second grade.   There might have been a bus accident, but I probably blew it way out of proportion.  I suppose I take after my mother in that respect.

I sometimes wonder which of my childhood memories are real and which were fabricated by a child with a vivid imagination.

Do you have childhood memories that you're not sure if they are real or not?   At what age are your earliest memories?