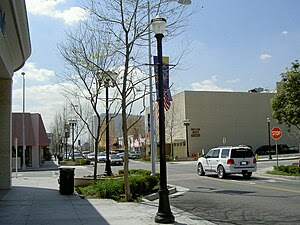 Downey Avenue (Photo credit: Wikipedia)
I was given a choice between Downey and Chicago.   The pay and benefits would be the same job-wise. I'd lived in the Chicagoland area before and knew the weather could be much less pleasant than Southern California.   The job site in Chicago was not in an area where there was good housing so that would mean a commute and traffic hassles.   In the end, the decision was easy.   I chose Downey, California as the location of my new job, my new home.

Downey was all about decisions, but that's what life is after all.  In the chosen home for my family the decisions were many.  I had taken a job as the manager of a wholesale costume company--the job of a manager requires daily decisions.  However, it was the decisions I faced at home that impacted my life the most.  They were not just my decisions, but also the decisions of my wife who soon became my ex-wife.

There were tough times.  Emotional times.  Sad and happy times.  In the end though, it was a time of hanging in there and doing what needed to be done.  That was the crux of my biggest decisions--the responsibilities of raising kids, running a business, and eventually meeting a woman who would become my next wife.

Over all, things turned out okay despite the job ending after eighteen years.  The kids all graduated from Downey High School and went on to be responsible adults.  I'm still with the wonderful woman I met and married in Downey.  We moved out of Downey after we got married, but not far--it's only a couple miles away and I'm still there several times a week.  I guess I could say I live in the Downey area, but for anyone not familiar with that I'd say the Los Angeles area.

I guess what I can say is that when I moved away from East Tennessee in 1991, I moved to Downey, California.   And that's all I have to say about that.  It was a decision that now I live with.

What decisions have you made that changed your life in a major way?   Are you happy with where you live now or would you prefer to live elsewhere?