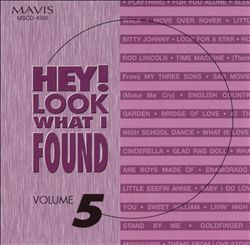 One of the more effective stimuli that prompt past memories are the songs from our past.  How many times have you heard a song that took you back to some special time in your life?  Often I'll be in the grocery store or driving in my car and hear a song that sparks an event in the past, a special person, or a place that I associate with that song.   Music can be like a smell, a photograph or anything else that takes us back into our past.

These thoughts are inspired as I listen to a compilation CD of pop songs recorded between 1957 and 1972.   This particular CD is volume 5 of a series called "Hey!  Look What I Found".   It's a CD that I found on Amazon a few years back when I was looking for a favorite song called "Look for a Star".   The internet is great for digging up things like that and Amazon seems to be the most comprehensive source for a lot of obscure things one might be looking for.  In fact, I found the song I was looking for on two different compilation albums and each contained rival versions by two different artists.

The song "Look for a Star" came out in 1960.  I didn't hear it until late 1963 or early 1964 when I went with my father to see a film called Circus of Horrors.  I guess the song stood out for me so much because it is used several times in the film and it's a rather nice song that appealed to my taste.  In 1965 I found a 45 record version of the song in the cut-out bin at a Sears store.  I enjoyed my vinyl copy until 1969 when I gave away all my 45's, a move I later regretted.  But 45's were no longer in vogue and I was more into the LP albums.

The CD I now own is kind of a fun recording.  I'm not familiar with many of the songs or artists.  Some I do recall hearing in my younger days.   One interesting cut is "Stand By Me" as performed by Cassius Clay.  Some of you may not know this singer by this name since he was not really known for his singing, but for his boxing abilities and the name he is now known by--Muhammad Ali.  Then there is a Kenny Rogers recording that was released in 1958.  I had no idea that Rogers had done any recordings prior to his rock/pop stint with the First Edition and then later in his most famous role as a country/pop superstar.

A fun exercise you might want to try is to compile a soundtrack of your life.  This makes a fun blog post and a nice way to tell a bit about your own life story.   I've actually done two of these on my main blog.  You can see mine at The Soundtrack of My Life and the follow-up post The Soundtrack of My Life (Number Two).  If you decide to do one of your own, please let me know so I can be sure not to miss it. Have fun with it.  Music is a great way to journey back into your past.

Have you put together your own life soundtrack?   What is the music that evokes the most memories for you?    Do you ever hear a song come on when you don't expect it and have it dig deep into you soul and memory?