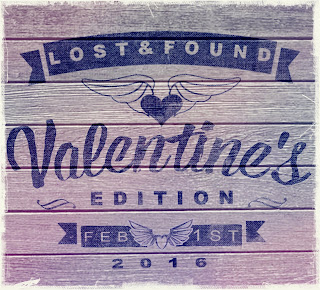 This post is my Wrote By Rote entry for the Lost & Found: Valentine's Edition blog hop hosted by Guilie Castillo-Oriard, Alex J Cavanaugh, Denise Covey, Yolanda Renee, Elizabeth Seckman, and me.  Be sure to visit all of the hosts for this event.  To find the full list of participants visit the list on Tossing It Out or any of the host sites.  My post on Tossing It Out (appearing on February 1st) will also feature a related Battle of the Bands installment so please be sure to visit and vote if you can.

Participants are sharing their stories and experiences concerning love lost and love found.   We all have stories in our lives relating to this matter.   I have several.  This is one of them--the most important one...

As far as things go in my life 1992 was kind of a bad year for me.  My wife at the time and I had only been living in Los Angeles for less than a year when she seemed to go haywire.  The end result was that she left me and our daughters to pursue the proverbial greener grass that in the end was not all that green--but that's her story to tell and not mine.

My world seemed upended as future dreams for that marriage were shattered and I was left to contend with holding down my job while attempting to provide as much stability and normalcy to my daughters' lives as I could muster.  With the help of God and a few well placed individuals I managed on through the next few years.  I was depressed and heartbroken, but I knew that life had to keep going.   I had kids to raise and a broken self to fix.

A few relationships were attempted, but nothing seemed quite right with those so they didn't get far.  Those ladies wanted things to go further, but I was wary after having gotten burned already.  My priority was taking care of my children and that can be a hindrance to a relationship.  The main thing I wanted to avoid was getting involved in a relationship that wouldn't last.  When warning signals began flashing, my response was to back off and rethink the situation.  I was lonely for a partner, but I didn't want to take a step that might send me off of another emotional precipice.

In 1996, after my oldest daughter had entered middle school, a different strategy evolved.  She had many friends, but there was one in particular that was her "best friends forever" type of friendship.  They became almost inseparable.  During their times together they obviously discussed their lives and found that they were in similar situations.   My daughter's friend's mother was also a struggling single parent.   Enthralled by the idea of becoming sisters so they could always be together they devised a scheme.

The girls were at this time ready to enter high school.  An opportunity arose with the orientation for new students and their parents.  I sensed that something was afoot by hints my daughter had been dropping about meeting people on that evening.   After the orientation event was over, my daughter introduced me to her friend's mother.  As the girls slyly went ahead to giggle and chat with each other, this lady and I were left in an awkward position of making small talk.   My daughter's hints were not lost upon me so as we all parted I suggested to my new acquaintance that perhaps we could go out for dinner one night.  I got her phone number and told her I'd call later to make arrangements for our "date".

As things turned out, Betty and I went out for our dinner date.  I was impressed and apparently so was she.  Betty was not confident about her ability to communicate since English was her second language, yet we always found plenty to talk about as we spent evenings on the phone and began going out on a regular basis.  Her communication was fine as far as I was concerned.   She was intelligent--after all she held a PhD and worked in the field of education.  After a year of dating we got married at the end of 1997.

Most likely we would have never encountered one another on our own.   We found each other through the secret strategy of two young girls who wanted to be sisters.  Thanks to our daughters we were able to establish a new family.   They each gained a new parent and Betty and I gained new daughters.

Now the girls are grown and have moved away to start their own lives and families.  Betty and I still have each other.   This year we'll celebrate our 19th anniversary.   We've been discussing our future plans for after Betty retires.   She's a wonderful lady with great values.  She is definitely a keeper.  I don't want to lose her.