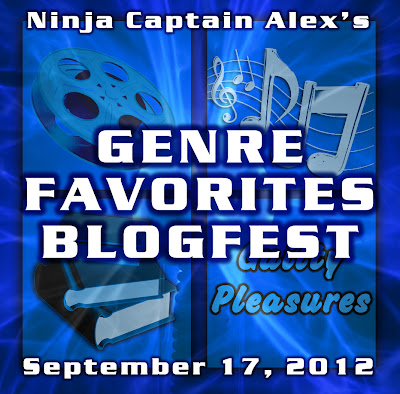 Genre Favorites Blogfest, September 17, 2012
One blogfest, four favorites!
List your favorite genre of:
Movie
Music
Books
And a guilty pleasure genre from any of the three categories!
Visit all the participants at Alex J Cavanaugh and keep in mind that if you've arrived here before the official start date, I've posted early--most posts won't be available until Monday September 17th.
I enjoy talking about favorites so this is the kind of blogfest that I can't resist participating in.   Now what's my favorite today may not be my favorite next week or even later today.  My mood also can influence what I consider a favorite.    For me taste can be fickle, but I'll stick with some generalities that have consistently stayed favorites with me throughout the years.

Movies -- One genre that I consistently enjoy watching and am a sucker for any new one that comes along is TIME TRAVEL.  From those early Twilight Zone episodes involving time travel to the cheesy show Time Tunnel to the great Quantum Leap I've always loved the concept of moving through time.  A favorite movie of the genre is the 2007 Spanish film Los Cronocrimenes (Time Crimes).  It's a mindbender that only involves traveling  an hour into the past, but it raises some interesting conundrums.  I'm still waiting for the English version.

Music -- I'm fanatic about music and love nearly all kinds.  From childhood I've always loved classical and now that's what I listen to much of the time.  In my teens, during the British Invasion of the 60's, I acquired a tasted for modern rock and roll.  A favorite genre in popular modern music is alternative/progressive rock.   This covers a very wide span for me.  A group that I've discovered recently thanks to blogger Deniz Bevan is a Welsh band with the odd name of Gorkys Zygotic Mynci.   They sound like a group from straight out of the early 70's--my favorite modern era of music--though they started releasing their recordings in the 1990's.

How about a sample of their sound:


Books -- When I was a teen I mostly read science fiction and mysteries.  After I got into college I became interested in Southern Literary Fiction and that is still a big favorite.   I enjoy William Faulkner, Cormac McCarthy, James Dickey, and others.   But my biggest favorite of all is the great Flannery O'Connor--her influence holds sway over much of my writing.

Guilty Pleasure Genre -- From Movies it would be Musicals!  I love musicals:  Carousel, Oklahoma, An American in Paris, Cabaret, Evita--there are not many I haven't liked.   I especially like the old films with Fred Astaire and the dancing spectaculars staged by Busby Berkeley.   If there's a juggler in it that's an added bonus.   Since I grew up in show business I can appreciate the nostalgic draw these old films have for me about the lifestyle, and these old films capture the spirit of show people and the lives they lead and I can identify with these films.

So there you have it.  My favorites are probably way different than most of the entrants, but I guess it's partly a factor of age and upbringing.   If you haven't experienced some of the things I've mentioned by all means check them out.  They've rewarded me.  Perhaps you will find some of your own rewards in them.