When You Can't Read What They Wrote

My guest for this post is Peter who comes to us from the German transcription/translating service Metascriptum.  Most of us will probably never need a service such as this, but you never know and it never hurts to find out what's out there.  Maybe Peter will give you some ideas about where to turn concerning some of the documents you own.
A Brief History of German Script 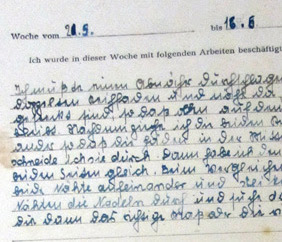 German script has undergone many changes over the last several hundred years. Like the German language, it has changed and evolved, and seen many different dialects. The standard German known today is much easier to understand, but it leaves older documents for those specially educated to decipher.
The history of German script is an interesting one. The script used today has been in place since 1941, when Hitler mandated that the more traditional scripts were not to be taught in schools any longer. However, the history and changes of German script began long before this time.
The History of the Different Forms of Kurrent
Kurrent was developed in the sixteenth century from the old gothic script. By that time, there were many different forms of gothic script, and the need for a uniform German script was emerging. The form of writing developed and matured over the next two hundred years, until the “modern” form of Kurrent was established.
However, this Kurrent writing was hard to learn and harder to write for young people in school. In the form of writing there are many straight lines, sharp angles, and abrupt changes in direction. In the nineteenth century, Ludwig Sutterlin developed an easier form of Kurrent for school children to learn. It had more wide curves and fewer sharp angles. This form of Kurrent was adopted in all German schools by 1934.
Sutterlin Kurrent writing was taught in schools as late as 1954 as an elective afternoon course in some German schools. However, its use has faded out to the point where no one today uses the old German script, and few can read it.
Why Kurrent is no longer Current
In 1941, Hitler proclaimed that Kurrent was Jewish, and therefore taboo. It was mandated that Kurrent no longer be taught in German schools. The real reason for this was that the Germans were finding that people of other countries they were occupying could not read the Kurrent script, and therefore it was causing a language barrier not easily surmounted.
This resulted in Kurrent no longer being taught, and instead a more uniform form of writing was put into place, which is the script that is common today. After Hitler was no longer in power, some schools brought back the script as an elective course to encourage students to keep the form of handwriting alive. However, even this later became nearly nonexistent. Today, there are some courses found if you search far and wide that teach the old German script. However, most of the world cannot read it or understand it at all.
It is very possible that documents written in Germany prior to 1941 cannot be read by those who possess them. You can easily discover the information within these pages, however, by contacting someone who is knowledgeable in the various forms of Kurrent. These educated professionals can transcribe your documents into modern German or translate them into English. Thus the information and history hidden in old German script can be recovered.
Metascriptum offers the transcription and translation of documents written in old German script.  Link to   http://www.metascriptum.de/german-handwriting .
Do you have any documents written in older German Script?   Do you have documents in any other languages where the script used is difficult for the modern reader to decipher?   How's your handwriting?