HOW I ALMOST KILLED MY MOTHER: Guest Post by Denise Roessle

I first discovered Denise Roessle in a guest post she did at Linda Hoye's blog A Slice of Life Writing.   She immediately caught my attention when she opened her story with a quote from my favorite author Flannery O'Connor.  Denise has an interesting story to tell in her book Second Chance Mother.  Today she provides a bit of insight about her book and the story behind the book.
HOW I ALMOST KILLED MY MOTHER
A Guest Post by Denise Roessle
I came close so many times — at least according to my father.
My murderous attempts on her life began when I got pregnant at 19. In the sixties, no greater shame could befall a family than having a knocked-up, unwed daughter. Since my boyfriend promised we’d get married, I postponed telling my parents. By the time he announced that he had changed his mind, and in fact didn’t love me, I was more than three months along.
Dad’s initial anger at my shameful behavior soon gave way to disappointment that I hadn’t confessed in time to have an abortion. Although this was still years away from being legalized, my parents would have gone to any lengths — an illicit procedure in some doctor’s backroom or sending me oveseas — to have the whole disgraceful mess erased. Plan B was to get me out of town before I started showing.
“If any of our friends find out that you’re pregnant, it would kill your mother,” my father said.
Unable to find a maternity home that could take me right away, he located an attorney who specialized in private adoptions. Within a week I was on a plane bound for another state. The lawyer placed me with an uninvolved family, where I did babysitting and light housework in exchange for my room and board. He set me up with a doctor who would oversee my prenatal care, deliver the baby, and defer payment until after the adoption.
My parents told my younger siblings that I was away at college. I had already confided in several close girlfriends about my condition.
“Don’t tell anyone else,” Dad ordered. “No one can be trusted. People talk, and if this gets out, your mother would die of embarrassment.”
Alone, afraid and ashamed, I complied. For the next five months, I struggled against the urge to bond with the new life that swelled my belly and twisted just below my heart. I entered labor with the anxious resignation of a surgical patient scheduled to have a burdensome growth removed. Only when my son’s body was pulled from mine and I heard his gurgled cry did the loss take hold. But by then, I had accepted my fate. Everyone insisted that giving my baby up for adoption was the best thing for both of us. He would have a stable, two-parent home and opportunities far beyond those an unwed mother could provide. I would be reborn a virgin, go back to college, meet a nice man, get married, and have children I could keep. They said I would forget and move on.
I moved on, but I did not forget. That failure led me to believe there was something inherently wrong with me. So I buried my feelings and continued to keep the secret. Although I finished college and married, I never had more children.
Twenty-five years later, my son and I were reunited through a mutual-consent registry that reconnects family members who had been separated by adoption. Elated by this second chance at motherhood, I told all of my friends, as well as my sister and brother. I hoped that enough time had passed that my parents would see this as a good thing. Dad voice bordered on joyful when he first heard the news, but once he’d shared this with Mom, he was back on guard. He warned me not to tell our extended family.
“Please don’t tell the relatives about Josh. That would kill your mother.”
I struggled with this for another year before deciding that I had lived with the secret long enough. After reuniting with my son, my loyalty to them changed to him — and to myself. I shared my reunion openly and began writing my story.
Once I had a decent draft, I offered copies to my sister, brother and father. Dad said, “Oh gosh, I have such a stack of things to read right now, I probably won’t have time.” I could hear the meaning behind his words: He couldn’t have that book in the house. My mother would die if she found out I’d written it. My sister read it and said it explained a lot of things. My brother also read it, and true to our family tradition of secrecy, he emailed me: “You can’t publish this. People will be hurt.”
“Bob,” I wrote back, “people have already been hurt.”
He told me to never speak of it again. For the next several years, I didn’t mention my book — not to any of them — until it had been accepted for publication.
My mother didn’t die after any of these egregious acts on my part. In fact, my refusal to comply eventually forced my parents to accept my son or lose me forever. If only I’d realized that I could have stood up to them and disobeyed sooner.
She passed away in 2004, eight years before “Second-Chance Mother” was published. A blood clot took her while she was still in the hospital, two weeks after a successful back surgery. Although we’d never discussed what happened, nor the impact of adoption on me and Josh, by then I had made my peace with her — secretly, in my heart.
############################# 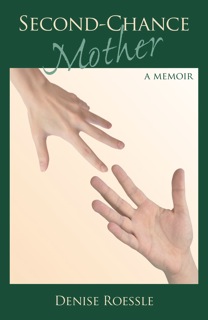 Second-Chance Mother is available as an ebook and in print on Amazon: http://amzn.to/MWalYG
For more about the author, visit her website: http://secondchancemother.com
Blog: http://write-o-holic.blogspot.com/
Facebook Fan Page: https://www.facebook.com/deniseroessle
Denise is also among 14 memoirists featured in the recently released anthology, “Loving for Crumbs” (edited by Jonna Ivin): http://amzn.to/PBWIfc
http://write-o-holic.blogspot.com/